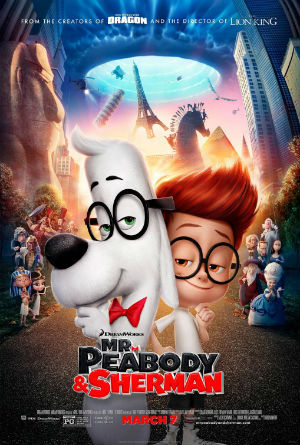 Everything gets a remake or reboot.  I don't really think thing anyone was clamouring for a Mr. Peabody and Sherman remake --but it happened anyway.  The characters come from shorts in Rocky and Bullwinkle TV series from the 1960's so I'm sure kids today have no idea who this character even are.  Mr Peabody and Sherman travelled through time in the original 1960's cartoon so I guess the concept has some potential.

The Movie:
The movie itself was alright--but not memorable.   This time travel adventure was high on quality action sequences --but missed the mark on humor.   I didn't laugh once.  Mr Peabody and Sherman as characters were just not interesting enough to carry the movie.   If you are going to do an animated Time Travel movie it needs to be funny.....and Mr Peabody and Sherman failed for me in that respect.

Time Travel:
The time travel aspects of the story were decent as far as the places the traveled and the consequences of their time travel,  but again I was thinking about a Family Guy time travel episode and how much better that was than this.

The average opinion on the Internet views this film more favorable than I did ....So my advice as always---would be if the trailer looks good to you give it a shot.   It is family friendly animated film with a few historically jokes that only adults may get...But definitely safe for the kids.