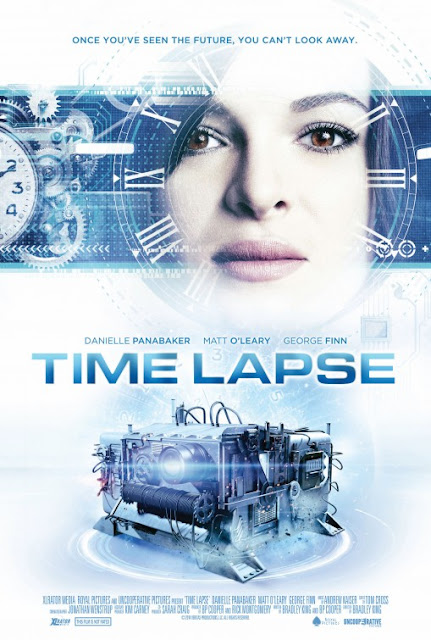 
After recently watching both Project Almanac and Predestination I caught a little bit of a Time Travel bug.   I starting seeking out Time Travel movies that I hadn’t seen yet.   Time Lapse from 2014 was 1 of 4 Time Travel films that I watched over the Holiday weekend.

When I saw the trailer on Netflix it immediately reminded me of an old Twilight Zone episode called A Most Unusual Camera.
Three roommates find a giant camera in an apartment directly across from them when they go to check on a tenant that seems to have disappeared.    The camera is capable of taking a picture one day into the future.


I loved the original Twilight Zone episode as you see the three people devolve and turn on one another based on speculation as to what the next day’s picture meant.   Theirs actions start to become a self-fulfilling prophecy.   This movie follows the same logic –but to a silly extreme.  The logic of the three main characters is absurd at times.   They find the body of the guy from across the street in a storage locker and he his skin is completely fried.   They immediately jump to the illogical assumption that if his death is caused by doing something different that what the picture shows.   This of course makes no sense .  No intelligent person would ever jump to such a silly conclusion.  This assumption drives the plot as they try and stage what they saw in the picture of the next day based on this nonsensical conclusion.

The characters are so simple minded in their use of the time machine camera.  The one guy places bets on greyhound races…..The lowest level of betting possible—which leads to the conflict of the film which includes a bookie that starts to question why the guy keeps winning.   That is an acceptable story for the 1950’s , but who in 2016 wouldn’t buy a lottery ticket instead of bettering on greyhound dog races????   The one character is more concerned with what painting he paints each day than anything else.    If these little details didn’t bug me so much I probably would have enjoyed the film more.   What actually happens to the characters in the story is interesting –  I just feel the writers didn’t know how to craft the story without the ridiculous leaps of stupidity to drive the characters actions in the film.  If you can get past the stupidity of the characters you may find it entertaining.


Our Podcast is Here
http://www.superfantasticterrific.com/
Posted by brad chowen at 7:59 PM