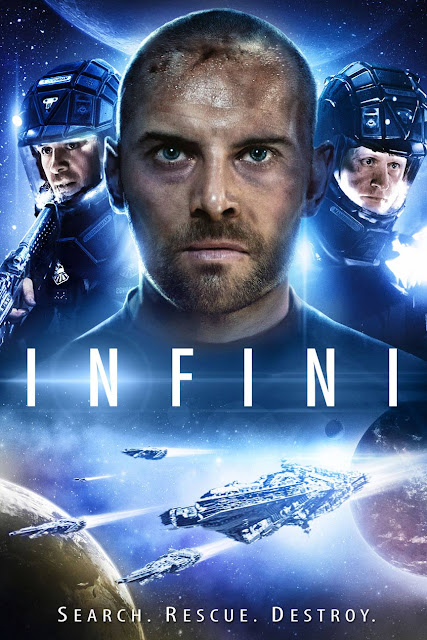 This was apparently a small budget Aussie movie that I had never even heard of before.  It centered on an elite search and rescue team being sent via some type of teleportation to an outer rim mining facility to rescue the lone survivor of a biological outbreak. The other part of their mission is to make sure that the outbreak doesn't get sent here in the form of a payload of whatever is being mined being sent back.   The movie started off really good and I kept waiting for it to take a weird turn that I wouldn't like or to become stale at some point --but it never did.  I watched this online on Netflix and the sound with the headphones was incredible.  The movie borrowed from many other sci-fi films.  It was a little bit Pandorum and little bit Starship Troopers, Alien, and The Thing.
I guess it borrowed from all the right movies.  There was a sense of tension that remained at a high level throughout the entire movie.

Basically the elite rescue team reaches the outpost to find a weird and creepy flash frozen space station where apparently everyone had gone crazy.   They find some disturbing stuff and then finally stumble upon the survivor. You don't know whether he has been taken over by the parasitic alien life form or not for most of the film.  He could just be crazy.  Everything that is just happening might just be happening in his mind.  The film does a great job of balancing and revealing he mystery of the mining facility and the end is satisfying even though you could interpret it either way based on whether you are a optimist or not.

I would definitely recommend this low budget film to sci-fi fans.

The Podcast is here
http://www.superfantasticterrific.com/