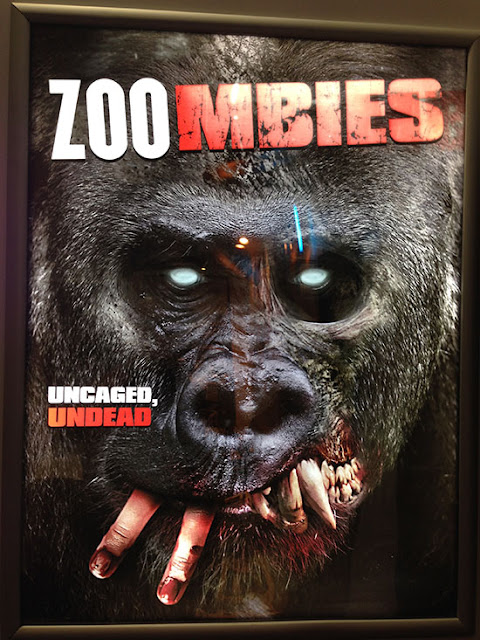 One of my favorite SO BAD it is GOOD movies was a low budget Jurassic Park rip off called The Mummy Theme Park.  Theme parks, museums and zoos are great settings for horror movies.   So when I was scanning the guide on the TV and saw this low budget Jurassic Park wannabe I immediately recorded it.  I mean it had a great concept.  A bunch of animals at a Zoo come down with a Zombie like Virus and all hell breaks loose.  I saw that it was an Asylum film which could mean that it was really horrible or that like Sharknado it could be SO BAD it is GOOD.  I guess it was wishful thinking.

I didn't recognize any of the actors at all in this flick...so they didn't spend the films budget on that.   Well they definitely didn't spend it on the special effects either.   The movie starts with an infected monkey at the zoo infected some other monkeys and taking out the scientists that were trying to help him.  To cut down on costs the Zoo hadn't actually opened to the public yet  (no need for those costly extras).  The movie basically consists of some interns and a small security staff as the victims of the spreading animal zombie virus that apparently turns the animals into some really bad CGI animals with Grey eyes.   The movie has some lackluster dialogue like "We could be dead and so could all the animals".  I was curious as to where they actually filmed the movie since it looked like some scenes were shot at an old abandoned zoo (not one that was about to open).

The best moments were the CGI Giraffe attack and the attack Koala which the little girl ( SPOILER)  apparently takes a baseball bat to off screen.

Like I said it was a cool concept that was just severely limited by the films budget --which was a shame.  I give them credit for trying....I'd just like to see this concept done right with a lot more money.

One other thing.....The Movie title was weak.....Better titles would have been.   Zombie Zoo.   Death Zoo.  Really Wild Animal Park of the Dead.

The Podcast is here
http://www.superfantasticterrific.com/
Posted by brad chowen at 6:37 PM