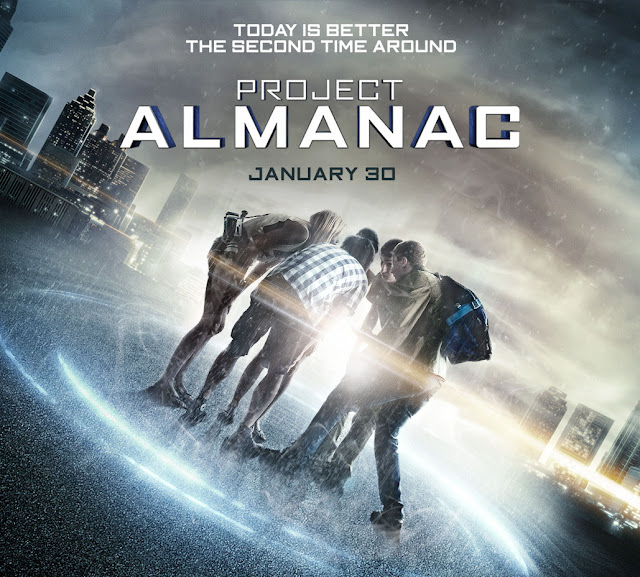 In Project Alamanac Time Travel meets the Lost Footage genre.  I remember thinking the trailer looked cool last year when the movie came out--but I never got around to seeing it.  Lost footage films are interesting--yet often really unrealistic by the nature that someone keeps filming the whole time.

I was able to suspend my disbelief (as one of my Podcast co-hosts says) in this particular lost footage film.  The story captured my attention from the beginning.   I will pretty much watch any movie that has to do with Time Travel and so when I was returning from Hawaii this past weekend it was able to watch this on the plane I leaped at the opportunity.   I personally loved Project Almanac even more than I expected to.

The movie follows a group super smart teens who stumble across weird footage on a VHS tape of one of their 6th birthday parties in which one of the teens sees himself in the background of his own party.  This discovery lead them into his dad's basement where they find plans for a Time Machine.  They tinker with the plans until they finally succeed and are able to test the Time Travel device with small little group missions to try and fix small problems in their life (like failing a mid term exam).

They set up rules  (Very much like in the Lost Footage Super power movie  Chroncile.   They will always jumping together, etc....
They then start letting the power corrupt them with a trip back a day to win the lottery.  The main character then spoils them all with a trip to a concert that has already happened with backstage  VIP passes he bought online for a couple of bucks after the fact. He misses his moment to kiss the cute popular girl and when that moment fades days later he decides to go back to the concert and this time not blow his big moment and go in for the kiss.   This changes everything for him and when he jumps back she is his girlfriend and everything is perfect.....or so he thinks.   Apparently going to the concert --caused a Butterfly Effect that started a chain of terrible events -that have changed the world in a negative way. They discuss as a group going back and trying to fix things --by not going to the concert in the first place.   The main character starts leaping back and trying to fix things and instead keeps making things worse.

I thought it was a clever and entertaining Time Travel film.  The story was interesting. The cause and effects were fun to watch play out.  You wait in anticipation for the moment that kicked off the film where the main character jumps back in time to visit his own 6th birthday (the day his dad died).   I've seen many people online arguing about the ending--but I actually loved it.   I would definitely recommend the film for fans of Time Travel.  I enjoyed the nods to previous Time Travel films within the film as well.

It makes me want to do a list of my favorite Time Travel films.

The Movie Facebook page is here
https://www.facebook.com/SuperFantasticTerrificPodcast/
Posted by brad chowen at 7:00 AM