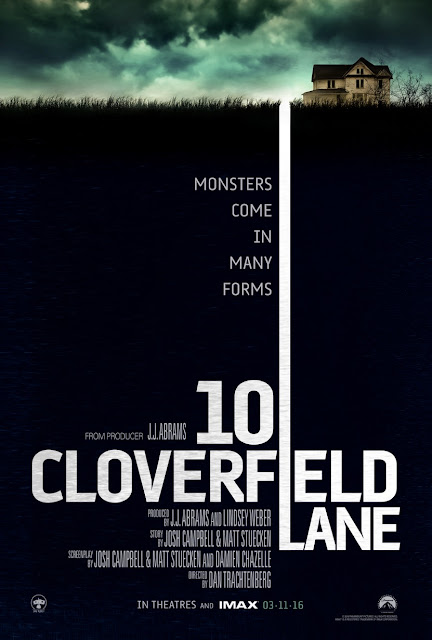 SPOILERS IF YOU HAVEN'T SEEN IT

10 Cloverfield Lane was a cool concept and the movie itself was interesting,  however it failed for me to a certain degree.   In fact the ending kind of ruined the film for me.  It could have been an 8 out of 10, but I didn't like how it turned out.  It set itself up like an M Night Shyamalan movie that was going to rely completely on a big twist at the end of the movie.  The story is about a woman that after getting hit in a car accident wakes up chained to a bed in a bomb shelter with two men.  Her main captor/rescuer (depending on what you believe) claims that the outside world has come under a chemical attack.   John Goodman does a great job as survivalist Howard that demands respect from the 2 people he has in his shelter.   The woman (played by Mary Elizabeth Winstead) doesn't believe that the chemical attack is real and desperately wants to escape.  The acting is great --but the issue with the movie is the plot.   You can't have it both ways and the movie does just that.   I think the movie needed to decide one way for another which way it wanted to go.

The movie should have you guessing whether there has really been a chemical/ alien attack is real or whether Howard is just a crazy killer.  Instead it gives you clues that the attack is real......then gives you evidence that Howard actually kidnapped and killed a missing girl ---then gives you more evidence that the alien attack is real.  It turns out both are true and I feel that is a cop out that took away from the movie for me.  A much better twist would have been to have the other character that was in the bunker turn out to be in on it with Howard or to have it be that Howard was just a strange guy that happened to rescue her.   Instead they make him a killer and .....the alien attack is real.   I feel that the film makers not making a choice to go in one direction or another takes away from the alien attack.   The alien attack being real at the end isn't a surprise....they have already gone out of their way to prove that it was real.  If you want me to suspend my disbelief---you can't have Howard be a killer and there is an alien attack going on at the same time.   It should have been a surprise until the end as to what was really going on.  Instead it just became so unbelievabl

Check out the Podcast Here
http://www.superfantasticterrific.com/