Here are some of the Trailer that came out of Comic Con 2018 on Saturday and some brief thoughts on them. 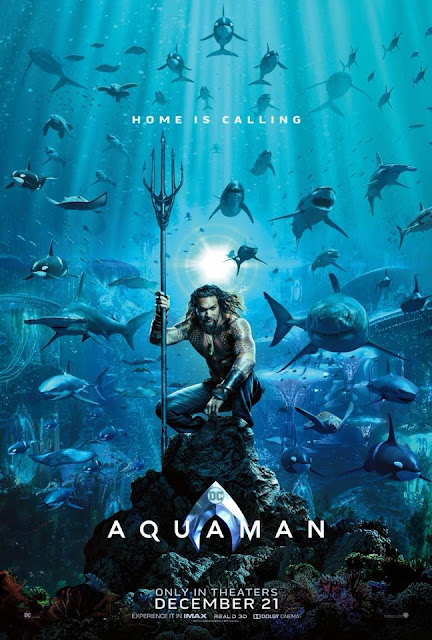 The trailer has some really great moments--but also has some cheesy moments.  I really don't know know what to make of it.   Plus not being a comic book fan I still picture Aquaman as the blonde guy in tights from the Super Friends.    You know lame Aquaman.  Obviously Jason Momoa's version is already a cooler Aquaman.

DC has a bad track record for me Wonder Woman was good --but Batman vs Superman, Justice League and Suicide Squad were all disappointing.    Where will Aquaman fall?

I really like Jason Momoa ever since I first saw him as the island bartender on a prime time soap style show called the North Shore.  He was also great in  (the not successful --but good in my opinion) Conan reboot and of course Game of Thrones.    I just don't know if I can trust what DC is going to do with the character of Aquaman.   My thoughts are to keep my expectations low for this movie and hope that it turns out good.

Shazam!  2019 Release   Grade C-
Ugh.   I wanted to like this .  Zachary Levi was amazing as Chuck in a TV Series that if you think about it mirrors the character of Shazam in many ways.   In Chuck Zachary Levi played an intelligent guy who ends up working at the Buy More as part of the Nerd Herd that fixes computers.  His character accidentally gets downloaded with amazing spy powers which made for a great fun spy/comedy tv show.    Shazam is very similar in that a kid ends up with Superman type powers.    This trailer was underwhelming and made me wish that they did a Chuck movie instead of Shazam.  Really is there anyone that was dying for a Shazam movie?   It feels like a super hero movie Shaq would star in.
I'll rent it because I like Zachary Levi

As a trailer it looks pretty interesting.  Unfortunately it is directed by M. Night Shyamalan whose movies after the Sixth Sense --seemed to get worse and worse with each film.  The Happening was one of the worst big budget movies I've ever sat through.   Signs was great until the lackluster and insulting to the intelligence of its audience third act.    If you like M. Night's movies then this is probably a dream come true .  The film has good cast and links several previous films.   Being fair to the trailer I think it does a good job of setting up what could be an interesting movie.   For me........    Just tell me the twist and I'll save my 10 bucks......    I 'm not getting suckered into another M Night film.

The trailer looks decent but all Godzilla movies look okay in the trailers.   They keep trying to do a big budget Godzilla and it always turns out to be not as good as you hope it will be.   I think Cloverfield and the first Pacific Rim have done it better.    The silly monsters that the old man in a rubber suit Godzilla used to fight are back in this film.  Eleven from Stranger Things is in this movie  , but they make her look exacly like her Stranger Things character that audiences may think she is Eleven.  I wonder if maybe Godzilla works better in the rubber suit.   I'm sure I'll see this when it comes out on DVD-- but not necessarily in the theaters.

Based on these  Comic Con trailers  I probably see Aquaman in the theaters.   The other 3 films ----I'll see eventually --but probably not until they hit Netflix.