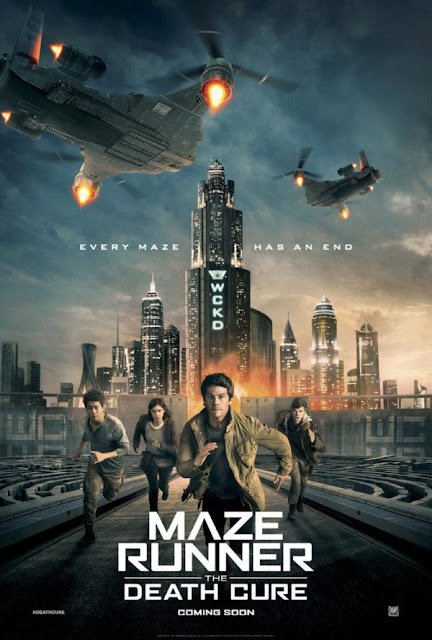 The Maze Runner: The Death Cure  7 out of 10 2018
This movie covers the third  book of James Dashner's 3 book series that was adapted for the big screen.

The first movie was basically a Lord of the Flies meets The Cube. (An interesting mix).
Here were my thoughts on the first one.
http://bradgeekness.blogspot.com/2015/01/the-maze-runner-better-than-hunger.html

The second film took things in a different direction.  It was still entertaining and had some great action sequences --but drifted too far away from what made the first film special and being a middle book of a trilogy --the ending was less than epic in nature.
Here were my thoughts after seeing the second film
https://bradgeekness.blogspot.com/search?q=Maze+runner

With the third and final film in the series starts off with an exciting train heist --but then becomes a slow and boring film for about the first hour.  I was starting to worry that like Divergent and Hunger Games this series was going off the rails as well.   All three Dystopian sci fi series were their strongest in their first films in my opinion.  In this final film of the series the goals of the main character Thomas seem to be so small in nature.   Bascially they are trying to break into the Last real city on Earth (protected by large walls) to save Minho who was captured at the end of the second film after Theresa betrayed the group of former Gladers.

The second half of the film picks up with some good fun action sequences and a character death that is a difficult one for fans of the series.  But the story becomes too typical for this genre in the third act.  I wish the films had been more like the first film and stuck with a more interesting and original story.  The concept of the original film was so fun and fresh that the direction the series went after that left me a little let down.

This film is basically saved by the action in the second half of the film and a good reflective ending.  I'm glad they were able to bring the series to a conclusion --which can not be said for the Divergent Series and several other movie series that attempted to repeat the box office success of the Hunger Games.   That being said, this was my least favorite film in the series.   I just wish the series had taken better advantage of the possibilities the first film developed.  If you watched the other two films I would suggest watching this to for resolution to the story,  just don't expect anything amazing.

Check out our Movie Podcast here
http://www.superfantasticterrific.com/
My Movie page on Facebook is here