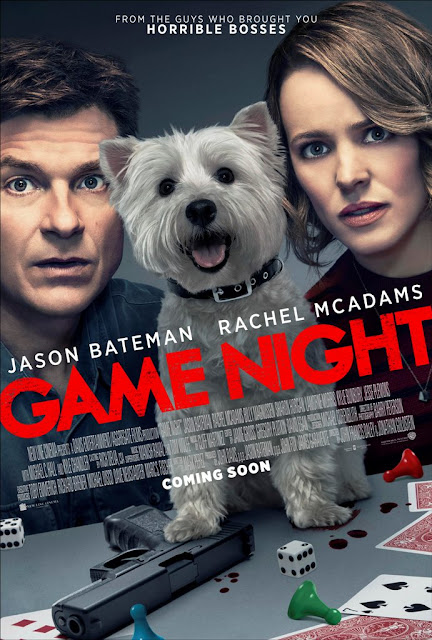 I liked the concept for this comedy starring Jason Bateman and Rachel Mcadams.   The movie is basically a comedy version of The Game starring Michael Douglas (I need to revisit that film).
A group of friends meet on a regular basis for a competitive game night.   When the main character played by (Jason Bateman) overachieving brother shows up to game night he invites the group to his house the next week to kick things up a bit.  They show up to find out that he has planned an interactive murder mystery that he has hired some company to put on.  The game kicks off as dangerous gangsters show up and attack the brother kidnapping them.  It is clear to the audience right away that this isn't the planned game -  but the game night couples assume it is and continue to sip their wine applauding the drama.

The couples think that the game is a foot and start following the fake clues unknowingly finding themselves in a dangerous situation.    The story really leans on your ability just go along with it and for much of the film I was able to.   Jason Bateman basically plays the same character he always plays which I'm ok with because he plays that character so well.  His chemistry with Rachel Mcadams was excellent,  they really worked well as a time.  The movie has many funny and excellent especially when they have to go over to the creepy cop neighbor's house to use his computer.   The creepy neighbor is played by Jesse Plemons who was so excellent in the Black Mirror Star Trek style episode.  This dude can act.   This character steals the movie in my opinion.

I absolutely loved one of the big twists in the film --which in my opinion should have been the ending --the film however decides it isn't over yet and continues into the truly hard to believe territory that I just didn't want to follow.   This actually took the film down a notch for me.

All in all I would say that if you like Jason Bateman and the comedy style of the Horrible Boss films (the same creative team was behind this film)  --you will enjoy this comedy.