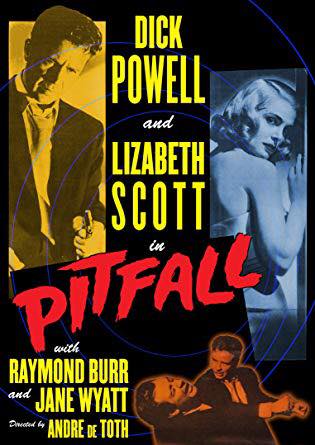 Pitfall is a film noir movie from 1948 that centers on a married insurance adjuster (Dick Powell) that falls for a femme fatale (Lizabeth Scott) while on a case to get some stolen items back.
As a result he gets himself caught up with a creepy private eye that has also fallen for the girl  (Raymond Burr) and her jealous boyfriend that is about to get out of jail.  It was a good quality noir film with an everyman getting caught up in a dangerous situation.   The conclusion of the film features a showdown with the unlucky insurance man and the boyfriend who has just been released from jail which leads to some great noir stuff.

The best part of the movie for me was Raymond Burr's creepy detective -who basically decides he wants the girl whether she likes him or not.  The creepy scene where he shows up at her work where she is modeling dresses was uncomfortable to watch.   The way he asks her show off the dress makes you feel like he is asking her to strip naked for him.   So weird to see the guy I only know as Perry Mason in such a creepy role.  The level of creepy from Burr is almost to the level of Robert Mitchum in the original Cape Fear.  His character basically orchestrates the final showdown of the film to get his rivals for the girl out of the way.

All in all it was a decent film noir effort that was more focused on how the average everyday man (perfect father) life unraveled after a brief affair with the wrong gal.

Check out our Movie Podcast here