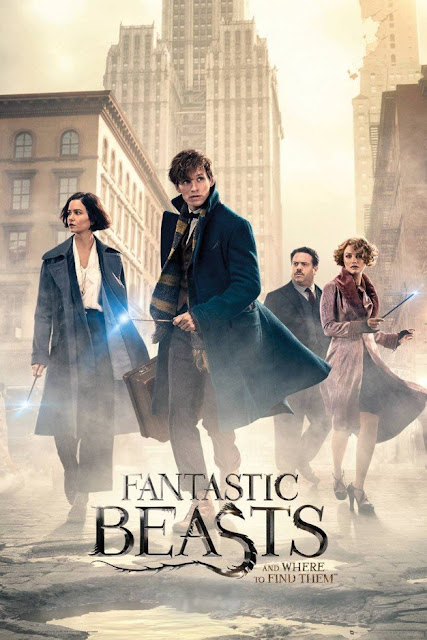 It took me awhile to get around to watching this expansion of the Wizarding World of Harry Potter beyond the Potter books.   When the trailer came out it just didn't really excite me.  I finally watched it this weekend and I guess my original feeling about the trailer rang true.  Despite the film being filled with magic on screen the story and characters didn't feel magicial to me.   It was missing something the films based on the Harry Potter book series had.

I was about 35 minutes into the film and was already looking at the DVD time counter to see how much longer the film was.  At this point in the film they go into the magical suitcase which is a home for a bunch of mysterious and incredible creatures.  The creatures themselves were cool and interesting --but the story had already lost my attention,   The world inside the suitcase was the most interesting part of the movie and yet it just felt like a trip the zoo.

The plot played out like a Men in Black movie with the main character a Wizard named Newt  (played by Eddie Redmayne) getting a Muggle (Dan Fogler) involved in his adventure to gather some of the animals that had escaped from his magical suitcase. Unlike Men in Black the film lacked humor, it tried to be funny --but never really succeeded.  Two of the creatures that they try and track down include a strange platypus looking creature that steals gems and gold and a giant "Horny" Rhino that they track to the zoo. Both of the scenes were meant to be funny, but didn't make me laugh at all.   I never found myself caring about the main character which makes it hard to really get into the film.

The plot was just dark and dull.   Despite great special effects and a nice wizard wand duel at the end of the film it just didn't take me to the magical world that the other Potter films did.  I know that this movie takes place in the Harry Potter universe --but it didn't feel the same.  It felt like a Harry Potter knock-off instead of a continuation of the Potterverse.

I would say skip this non-Potter adventure and re watch some of the original series if you are looking for fun.

Email ThisBlogThis!Share to TwitterShare to FacebookShare to Pinterest
Labels: Fantastic Beasts and Where to Find Them, Fantasy films, Harry Potter, Wizarding World