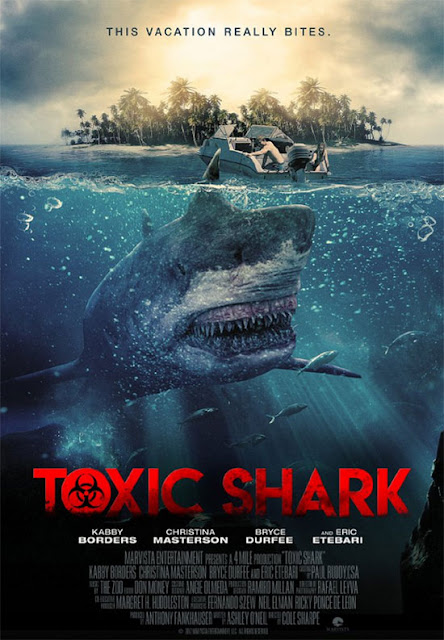 If you haven't figured it out already I'm a sucker for a bad shark movie.  I watch them out of habit searching for a So Bad it is Good movie and most often just getting bad.  The trailers are almost always better than the movies themselves and Toxic Shark is no exception.   Last year gave us Atomic Shark which features a radioactive shark off the coast of San Diego that wreck havoc.   Toxic Shark follows in its footsteps with story about a tropical singles retreat that features a shark that is not only radioactive, but also has horn like projection on it's head that spews acid at its victims.   It seems like this latest batch of shark movies no longer think sharks are scary enough on their own.  Trailer Park Shark could electrify people.  The 5 Headed Shark had 5 heads and the Toxic Shark spews acid that can turn beach goers into rabies delusional zombies.

The best part of this film was that one of the main stars Kabby Borders spends the entire film in a bikini.  Other than that we just get another Bad Shark Movie.   Stuck on an island the greedy fitness celeb running the island of course doesn't want to close the beach (typical Jaws Scenario).   In real life the beaches would close after the first shark attack,  in the movie world it takes a full on shark assault before they tell people to stay out of the water.   Of course even when people are aware of the shark the characters find stupid ways of getting into the water like trying to fix the phone lines which the Toxic Shark has cut off so the characters can't call for help.   The characters of course try to flee in the world's smallest motor boat.   There is nothing special about Toxic Shark other than dumb characters putting themselves into dangerous situations.

If I had to recommend a radioactive shark movie I'd go with Atomic Shark which at least had some unusual stuff happening in it that included tainted fish that cause a restaurant to explode after a TV host blows up after eating the radioactive fish.