The Orville Vs Star Trek Discovery Which show should you Watch??

I watched 2 of the new Shows we talked about on our recent FALL TV Preview Podcast  (Listen below)
http://www.superfantasticterrific.com/super-fantastic-terrific-show-27-fall-tv-2017-preview/

First I caught The Orville a Star Trek Parody by the Creator of The Family Guy Seth MacFarlane.

The Premiere episode was decent and I know I need to give another shot --but on first impressions it was underwhelming.  I love The Family Guy --but Seth's live action efforts so far have fallen short of what he can do in Animation.   I was hoping that this Star Trek Parody was going to be like Galaxy Quest or at least have some of the Family Guy style humor.  The premiere episode disappointed in that respect.  I just expected more.   Of course a premiere episode has a lot of story building and character introductions so I will definitely give this show a couple episodes more to see if things pick up.   I hope they are able to establish more of a sense of humor in the upcoming episodes as this first episode just felt like a watered down version of what I hoped for. 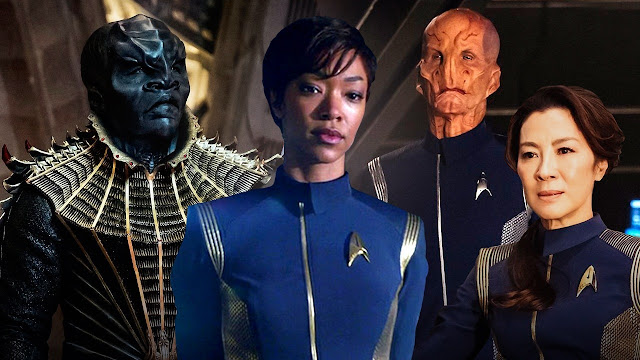 I also watched Star Trek Discovery.   What in the hell happened to the Klingons??  They look like some cheap  reject version of contestant on Sci Fi channels Face Off.   Supposedly this Trek effort takes place in the original Star Trek universe of William Shatner and the universe of the current Trek films.    What a strange decision?  Why Reboot the Franchise to then do a show in the old universe.    If this is supposed to be in that universe why make the Klingons looks so different???  Who knows.    The first episode itself was decent.  A crew of on a Federation Starship heads out to check on a relay station that has taken damage and stumbles across a bunch of Klingons.   A good start for a Star Trek series as the episode literally ends with a bunch of Klingons showing up for a fight.

The problem with this series is that after the first episode it will be heading to CBS Streaming only.   The first episode only wasn't compelling enough to sign me up for a whole new subscription service.     So I guess I will not be watching the first of this series until it hits DVD or Netflix.   I would probably watch more episodes if it remained on CBS, but not being a Trekkie I'm not willing to pay for this one show.