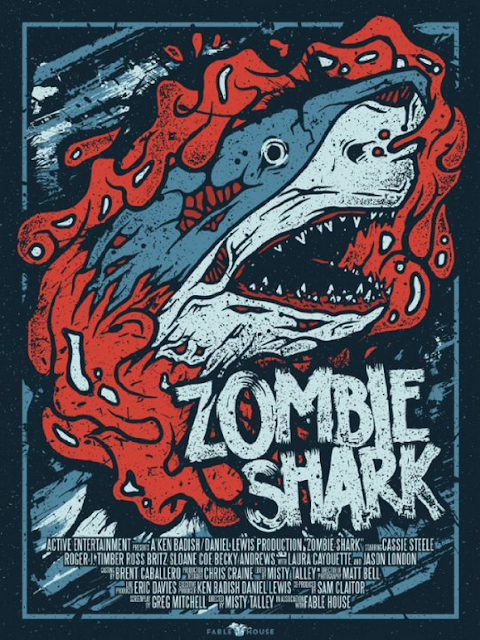 Zombie Shark was a boring bad shark movie.  It had some decent camera shots here and there--but was just dull as a whole.  Some friends decide to go to an vacation island for the weekend and end up getting attacked by sharks that are basically zombies.  Other than the catchy name of Zombie Shark --they really don't act or behave any different than regular sharks,  unless you count the fact that when they appear to be dead on the beach --they are actually just resting.  This movie tries to have serious dialogue scenes featuring the characters in the film that occasionally bring the movie to a grinding halt.  If you are making a movie called Zombie Shark --long character development scenes with characters talking about why their mom likes the younger sister better are just boring time wasting scenes that the audience could care less about.
The worst part of the movie is Jason London's "I don't really seem to care I'm in a movie acting."   He looked like a boring office worker --just showing up on Monday morning that hasn't had his coffee yet.  He brought this lackluster effort into every dull scene that he was in.  There are no laughs in Zombie Shark and even when the sharks start biting people and turning them into zombies there is really never any true tension in the film.     My opinion is to skip Zombie Shark and not be fooled by it's catchy title.   There are so many better bad shark movies to enjoy.

Here is a Fan Made Trailer for Zombie Shark