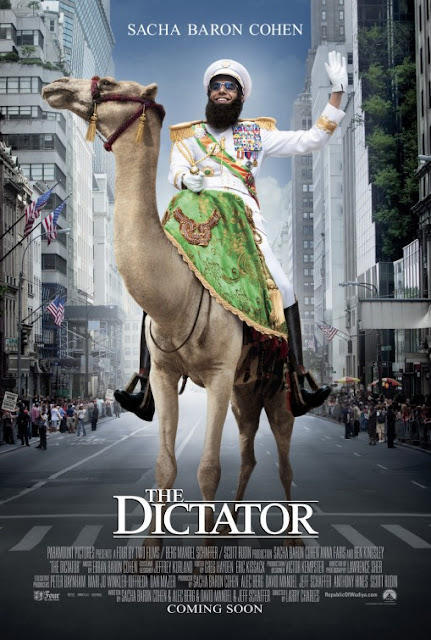 It took me awhile to get around to seeing The Dictator starring Sasha Baron Cohen of  Borat fame, but I truly enjoyed it once I did. We life in a overly sensitive, politically correct society.  A Society where everybody thinks they have been bullied and everyone is offended and hurt by everything that is said.   If anybody says anything we don't like these days the lynch mob social media demands an apology.  Our current world suppresses freedom of speech in favor of the victim mentality.   This movie was a refreshing breath of fresh air where jokes were allowed to be jokes for the sake of being funny (whether they offended someone or not).   It is totally politically incorrect and makes no apologies for its jokes in a world where comedians have to apologize daily for their material.   The Dictator follows the story of a Saddam Hussein type leader from a make believe Middle Eastern country as he makes his way to America to give a speech at the United Nations.  He is double crossed by his underlings and is mistaken for an average immigrant.  It is like Coming to America if Eddie Murphy's character had been an asshole.

The movie takes aim and makes fun of everything and anything.  It proves that you can make fun of even the most taboo and serious subjects.  I'm sure the average person would be extremely offended by certain scenes and subject matter in this movie.  There were certain scenes that even made me uncomfortable, but that is fine because we should be uncomfortable every once in awhile.  I personally think that we should be able to laugh and joke about serious subjects.  Laughter is meant to heal. Laughter is meant to give us a break from the crap that happens around us.  I think Sasha Baron Cohen did an excellent job in making uncomfortable subjects funny in this film.    I would recommend this you anyone that loved Borat or Bruno and anyone that has a thick enough skin to not be offended easily.
If you are easily offended -- then this isn't the movie for you.  If not enjoy one of the few moments when you aren't stuck in the political correct bubble that society is cramming us into.