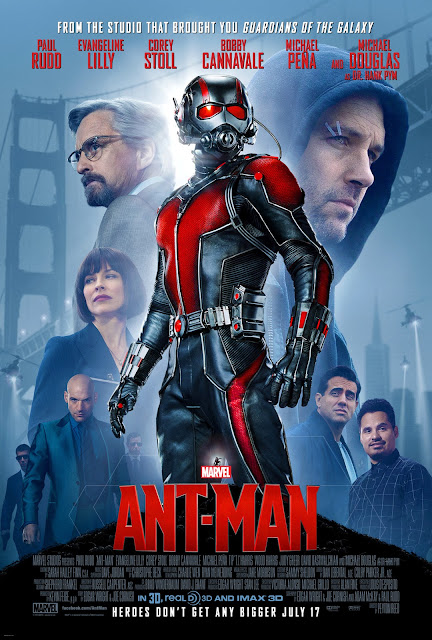 Ant-Man seemed like a really a odd choice -when Marvel/Disney
announced it as the final movie in what it is calling its Phase two films.  Excuse the pun --but it seemed like such a small movie to followup after the Avengers: Age of Ultron.   Ant-Man on paper just seems like a minor Marvel character that wouldn't really be that interesting and I think the general public saw him as such sense the box office was a lot smaller for this pint sized hero.  I got excited to see the film the same way I got excited for Guardians by attending  a 4-D sneak peek at the Disneyland resort.   Here is a look at my thoughts from the sneak peek and the Ant-Man costume that was on display.

Ant-Man the movie:
The movie itself was a fantastic action adventure comedy.  Ant-Man is a lot more of a bad-ass than you would think.  The movie tells the story of how a thief Scott Lang (played by Paul Rudd) gets entangled with inventor Hank Pym (played by Michael Douglas) who gives him a chance at redemption to become the hero his daughter already sees him as.   It is an origin story for this character that will become an Avenger in the upcoming next Avengers movie that shows how he learns to use the Ant-man suit and helps to basically save the world from Hank's former protege that plans to sell the technology --he kept hidden from the world for years.   His protege Darren Cross (aka The Yellow Jacket) has just re-invented the technology and is going to sell it to Hydra and so Hank Pym enlists and trains Scott to be the Ant-Man in order to stop him.  The plot was well crafted for an origin story and filled with just the right amount of action and comedy.

Special Effects:
This movie took shrinking to the next level.  We are no longer in the days of characters standing next to ridiculous over sized props like Lily Tomlin in the Incredible Shrinking Women. 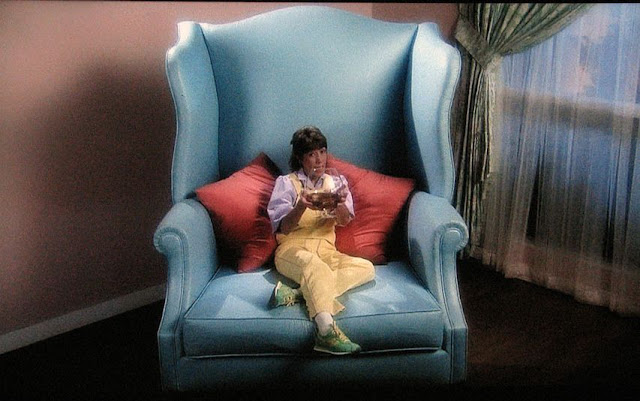 Although there is a great scene at the end of the film with an oversized prop used to get a laugh.   The special effects effectively shrink the character into an amazing world.

The Cast:
The cast was excellent.  Paul Rudd was a great choice for Ant-Man.  He brought just the right mix of humor and action hero to his starring role.  Michael Douglas was excellent as usual.  He still has it after all these years in his role as Hank Pym (the original Ant-Man).   I almost wish they could go back and time and see his earlier adventures as the Ant-Man.  It seems the movie business could actually do this now, since the scene at the beginning of the film was able to effectively de-age him to his younger self to play a scene between him Howard Stark/ and Peggy Carter from 1989.  It was like what they did with Jeff Bridges in Tron Legacy --but improved.    The actor that stole the movie however was Michael Pena as Luis.  Luis was  Scott's ex cell mate from prison and  every time Luis had something to say in the movie he was an absolute highlight.   I'd watch the adventures of Luis the criminal if it was turned into a TV show.

How it Connects to Marvel's Phase 3:
As I mentioned Ant-Man will be joining the Avengers -so this movie was basically an interesting way to introduce his character to the MCU.  He will be a part Captain America: Civil War which comes out next year (and has so many people in it it may as well be the next Avengers movie).   The opening scene shows that Hank Pym had a previous a connection to SHIELD and didn't trust Stark which will probably play directly into the next film.  Ant-Man encounters the Falcon during the film which will probably lead into Captain America directly as well--because at the end of the movie the Falcon is looking for Ant-Man before the end credits and mentions him to Captain America in a post credit scene.  I loved Ant-Man a lot more than I expected to when it was first announced and I'm excited to see him join the Avengers in this cool fun MCU that Disney/Marvel has created.


Our Movie Podcast can be found here
http://www.superfantasticterrific.com/