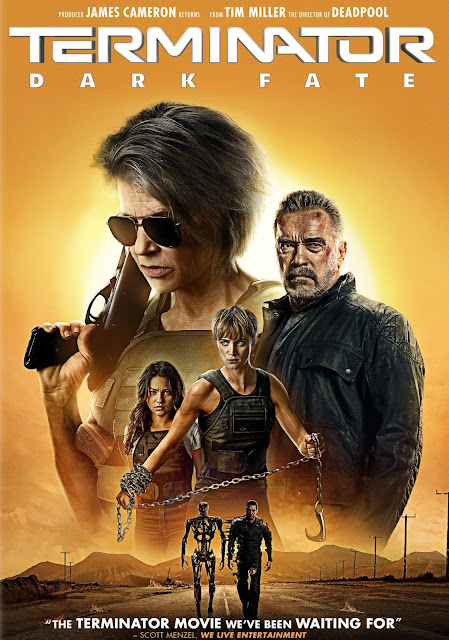 I have to be honest .....  I was really disappointed with this film.  It brought back Linda Hamilton --who has been absent from the franchise since T-2.  It brought back James Cameron (at least being involved in the series again) and it brought back an older more out of shape Arnold.  Honestly watching this film made me really question whether Disney should do Indy 5 with Harrison Ford.     I don't mean to be mean --but bringing back Linda Hamilton seemed like a good idea on paper -but instead of the bad-ass I remember from T-2, I felt like I was watching someones grumpy old grandma going on adventures.

Instead of following the events of the past Terminator (which I enjoyed) the series tries unsuccessfully to reboot itself yet again further damaging the brand.   It is like some weird attempt at doing a bad sequel to T-2.  It takes the franchise in another new direction where apparently John Connor has been killed by an Arnold Terminator after Skynet was stopped and yet further in the Timeline the robots still rise and now a new girl is the one that will lead the rebellion.    I didn't find myself liking any of the new characters that were introduced to the franchise.  The story seemed uninspired and unoriginal.   It was only watchable because there were some fun action sequences in the film.   As a Terminator fan I  would consider this film an unnecessary watch.  Box office wise this sixth installment was a disaster and may have permanently damaged a once thriving series.

Listen to our Podcast here
http://www.superfantasticterrific.com/
Posted by brad chowen at 7:45 AM