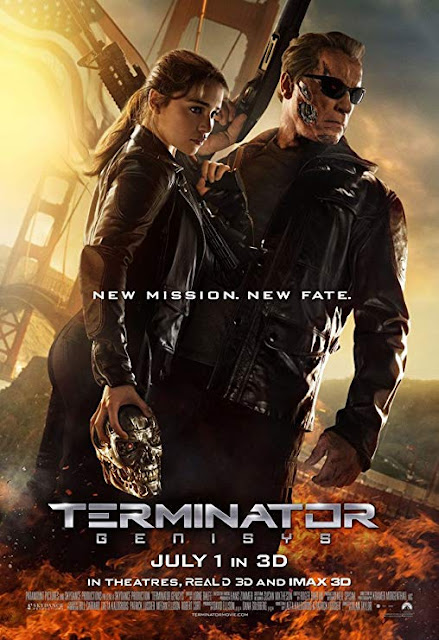 Terminator Genisys 2015   9 out of 10
The original Terminator was a terrific time travel action movie done on a low budget and starring a pretty much unknown at the time Arnold Schwarzenegger.  By the time they made the sequel T-2 Arnold was the biggest movie star in the world.  T-2 had cutting edge special effects and is one of the best sci-fi action movies ever made in my opinion.  It was a non stop roller coaster ride and a box office success.   The first 2 films were a perfect 1-2 punch--but of course like many other franchises --whether the story dictates it or not they keep trying to cash in on the franchise name. There was a third Terminator without James Cameron's involvement which was a good action packed film - but was the first piece in ruining the story laid out in the first 2 films.  It is almost like the franchise just abandoned all concept of connecting with the previous films which is why this once powerful franchise is less valuable today.  Sure some of the films were still enjoyable --but the franchise gets ruined a little with each unconnected film.
That being said I personally enjoyed Terminator Genisys as a solo film on its own.  If  T-3 and Terminator Salvation hadn't already happened this soft reboot that took some of the basic ideas from the original film and went in a new direction with them was satisfying to watch.   This film brought Arnold back deaged to look like he did in 1984.  It follows the Kyle Reese character sent back from 2029 to 1984 to stop Sarah Conners death (played by the talented Emilia Clarke).  When Kyle arrives in 1984 he finds that the past he thought he was being sent to has already been altered and the clueless girl he thought he was supposed to protect has been raised by a reprogrammed older Arnold. If the two previous films in the franchise hadn't happened this would have been an excellent addition to the franchise.  Unfortunately as a fan you pretty much have to pick and choose which films you personally consider canon to make any of the films work together.    I just really wish the franchise could have been run better from the beginning.  It is a shame that T-2 was so amazing and the franchise never even got close to being that good again.
Putting the franchise issues aside,   I really enjoyed this film much more than a lot of other people apparently did.  I thought the action and story were fun.  I actually loved Emilia Clarke way better than Linda Hamilton from the original 2 Terminator films. The old Arnold versus the younger Arnold was a cool element.

Listen to our Podcast here
http://www.superfantasticterrific.com/
Posted by brad chowen at 9:00 AM