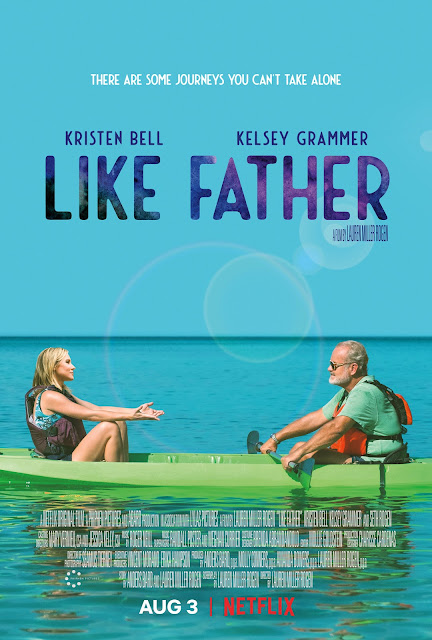 Like Father was a surprisingly charming straight to Netflix film starring Kristen Bell and Kelsey Grammer.  Kristen Bell's character gets walked out on at her wedding after she is delayed walking down the aisle because she is too obsessed with her phone and work even walk down the aisle on time.   Her father who walked out on her when she was still a kid shows up to the wedding and after talking her out for a drink they both end totally hammered and on her honeymoon cruise.

The film does a great job of exploring this broken relationship with the cruise as a backdrop.  It has a few funny moments --but for the most part it is a drama grounded in the reality of their broken relationship.    What makes this movie work so well is the talent of its main to stars.   I pretty much love Kristen Bell in everything and Kelsey Grammer was a part of two of my favorite TV shows (Cheers and Frasier).   The two great actors play off each other really well and made what I figured would just be a throw away movie a lot more fun,  especially the sequence where they compete in a on ship game show together.

If you don't go into this movie expecting big laughs and just enjoy the experience you may find this film as enjoyable as I did.