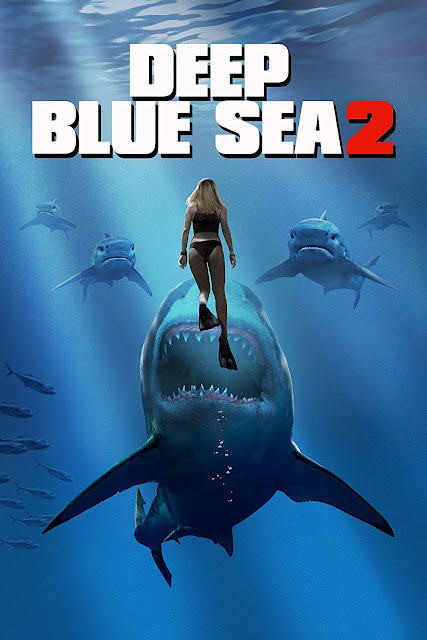 The only thing this low budget sequel has in common with the original Deep Blue Sea from 1999 (which was actually one of the only good shark movies after Jaws)  was that is had the same basic plot.   It was more like a low budget remake than a sequel and didn't reference or seem to connect with the original.   The story featured a rich delusional billionaire that is experimenting with shark to try and advance the human brain so that we can deal with the artificial intelligence.  Of course making super intelligent sharks is not a good idea and he results are predictable.

A 5 out of 10 rating is probably a little bit generous.  The first 45 minutes of the film are all exposition and the fact that this is pretty much a cheap remake makes that exposition unnecessary to this bad shark movie fan.   The second half of the movie redeems  itself a tiny bit with the underwater base getting partially flooded and the characters having to navigate half filled with water corridors with cool mood lighting.   Unfortunately this also limits the shark attacks to the concept new to this particular shark movie of intelligent piranha like baby sharks.  A decent concept that comes off less exciting than actual sharks on screen.   I guess the only thing that saved this movie for me was some of the really terrible dialogue that made it somewhat entertaining.   The awful banter between the characters is luaghable and that helped me stay interested to a certain degree.   The movie also had at least one decent shark attack death at near the end of the film and a cool hero shot as two characters take out a leaping shark with flare guns.  This would have made a good poster for the film.

All in all it was basically a cheap rip-off of the original actually good shark movie Deep Blue Sea.  Kind of a disappointment that they slapped on the Deep Blue Sea title on this low budget films because it gave me false hope for a decent shark flick.