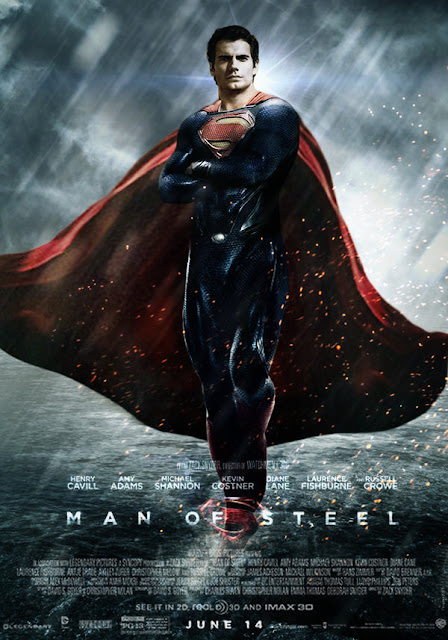 I absolutely hated Batman vs Superman.  When I saw Man of Steel was playing on TV,   I decided to record it on the DVR to give it a chance.  I generally hate Reboots and Superman had already been Rebooted recently, therefore I was really surprised by how much I actually enjoyed Man of Steel.

Man of Steel basically reboots the Superman II storyline from that nostalgic films.  The film features Superman battling General Zod in an epic battle.    Superman II was by far my favorite of the Christopher Reeves era Superman films of which only the first 2 of 4 films were any good.   Terence Stamp will always be General Zod to me so I wasn't going to like that character as much.  As much as I loved Superman II it now seems cheesy when compared to the special effects of today and what they can now do.  This Man of Steel was like Superman II on Crack.   I actually really enjoyed the film (a lot more than expected after the awful Batman vs Superman film).    Man of Steel gives me hope that The Justice League film could actually be good.   Henry Cavill is great as Superman and Ben Affleck was good as  Batman. Batman vs Superman suffered from a terrible script.   Man of Steel had a much better and coherent storyline.

Man of Steel utilized the character of Superman to his fullest potential.  The battles with Zod and the other Kryptonians were great to see on screen and made the scenes from Superman II look pedestrian by comparison.  The stuff with Russell Crow as Superman's dad  (although weird) was fun to watch.   Not being a big comic book fan beyond Star Wars and Indy I don't know much about Krypton other then the cheesy scenes with Brando from the original Superman.  Krypton actually looked like an interesting planet and gave Superman a cooler back story than just his Ice Castle in the original films.  I just hope that the Justice League will be more like Man of Steel than Batman vs Superman.     I thought Man of Steel was a solid 8+ out of 10 while Batman vs Superman was a dud to me..

Here was my less than favorable reivew of Batman v Superman.
http://bradgeekness.blogspot.com/2016/04/batman-v-superman-2016-3-out-of-10.html

Our Podcast featuring over 21 episodes can be found here.
http://www.superfantasticterrific.com/
Posted by brad chowen at 6:15 PM