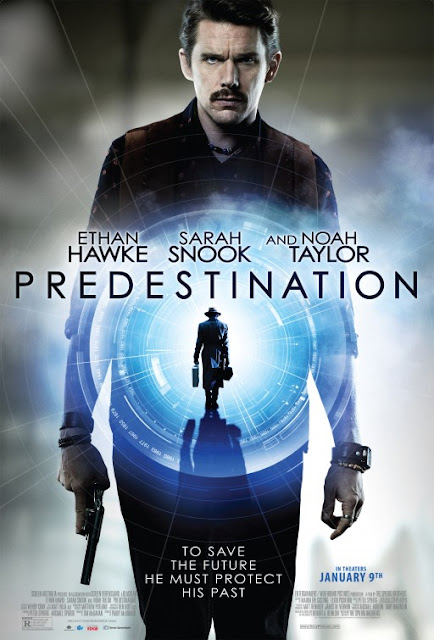 I recorded it on the DVR base on the description –“A Temporal Agent embarks on a final time travel assignment to prevent an criminal from launching an attack that kills thousands”.    It sounded like a Twelve Monkeys kind of movie.   What you get is something completely different.   You can’t talk about this movie without running the details of it.

It is actually a really hard movie to review.   My thoughts about the film changed several times while watching it.   The movie was described as being about a temporal agent that is sent back in time to stop a bomber… The concept sounded very interesting,  but the plot immediately took and unexpected turn as the temporal agent (played by Ethan Hawke)  is bartending in a dive bar in the 1970's. He ends up talking with a customer that he thinks is a man (but is clearly played by a women)  who tells him this super long story which takes up the front 40 minutes of the film.  It was a story of an odd girl that wants to go into space via some space program.  She then meets a mystery man that she falls in love with before he abruptly bails.   Her goals of making the space program are dashed when she ends up pregnant.   And then in a weird twist after she has her baby the doctors tell her that she actually has both male and female parts and that after the birth they had to switch her sex.    Okay that is weird....and not exactly what I was expecting the movie to be about....
At this point in the film I was about ready to give up on it.
This definitely wasn’t the movie I thought I would be watching.
I thought I would be watching a Time Traveler trying to stop a bomber—but instead I get some weird sex change story.  And someone steals her baby causing her to hate the mystery man. She hates him so much that she wants to kill him if she could ever find him again.   WTF…..  I was bored and uninterested in where this movie was going.    Just when I was about to give up on the movie it turned a corner and actually got into the time travel aspect of the story.  The Time Traveler is apparently there to recruit her/him and the story actual gets interesting for a little bit.   Maybe this movie could be salvaged?

But then the film gives us another twist …..John/Jane gets the chance to confront the man that ruined her life….but it turns out it was her (now a man from the future ) that was the mysterious stranger.

Okay now it is just weird again.  Only to get weirder when John/Jane impregnates herself and the baby they have is……..Wait for it…. Her  ?!?@?!     And the Time Traveling bartender guy then leaps around some more and steals the baby taking her back in time to leave at orphanage.   He then goes back to take the John/Jane character back to the future that he came from –drops her off and goes on his final mission to kill the bomber…..Which is of course…..wait for it Himself gone crazy.  And it turns out he is John/Jane as well.

So basically he is his own Mother/Father/Bomber and who knows which bathroom John/Jane will use and in what decade.   It had some good moments ---but I prefer the Back to the Future idea of Time Travel –where there is a clear branching for Futures over the what came first the Chicken or the Egg Time Loop that makes no sense time travel.  And I also prefer my Time Travel movies to get to the time traveling instead of getting bogged down in a strange sex change story line.    The movie although interesting in sections –seemed to really have no purpose in the end.