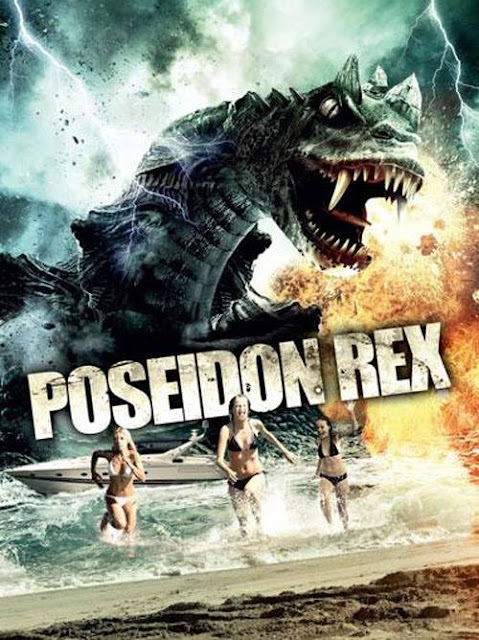 I knew exactly what I was getting into when I started to watch Poseidon Rex.  I’m beginning to think that I watch some of these movies just out of habit.  It is like an OCD collection type of thing. I'm compelled to record and watch these cheesy Syfy channel style movies.  I’m a sucker for a Bad Shark movie and an Aquatic T-Rex –is basically a Shark movie with a Dinosaur.

Poseidon Rex was exactly what I expected.   In fact the story was so generic and followed such a formula that I felt like I had already seen this movie already.   I probably have to a certain degree as the plot seemed lifted directly from a bad Shark/Monster movie that I’ve seen in the last few years.   The main actor had a name I recognized although his face wasn’t familiar.   The movie of course had a cute blonde “Scientist” with plenty of cleavage (the only good part of the movie)   It had a treasure hunter and Caribbean gang lords.  And of course it had a T-Rex like Creature that could kill on both sea and land.  Watching these movies is like watching old A-Team episodes ---every episode is the same.  You tune in to see the cheesy CGI monsters eat people while you are folding laundry on the weekend.

Our Movie Podcast page is here
http://www.superfantasticterrific.com/
Posted by brad chowen at 6:54 AM