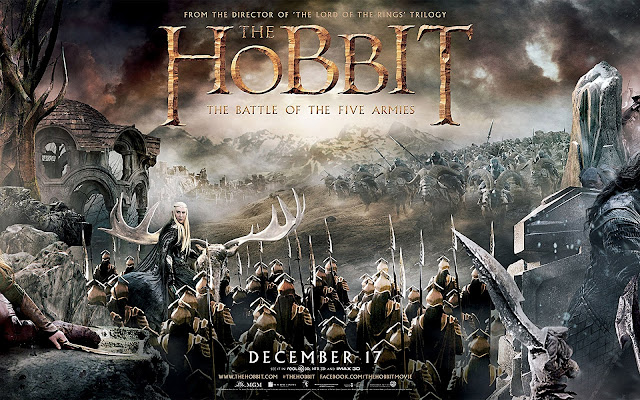 I can’t explain why it took me so long to see the final Hobbit….
I was a huge fan of the Lord of the Rings Trilogy… I saw every single one the first week movies in the theaters.    I spent hours watching extras and behind the scenes of the trilogy as soon as they came out on DVD.  I was excited when the Hobbit was eventually announced---although I couldn’t imagine how they were going to turn this small more kid friendly book into something as epic as the Rings Trilogy.    When they announced it would be 3 movies…..I was kind of shocked.   The Lord of the Rings trilogy was three movies –but each movie covered one book and those books were much longer than the Hobbit.  Obviously the Hobbit movies were going to have to have a lot of new stuff and filler to make this much shorter book into a trilogy.     Of course Peter Jackson was going to be involved so that made me feel much better.

The first Hobbit although it had a different tone  (set by the silly sequences of meeting the Dwarfs)…still felt like Middle Earth.
It felt like the beginning of a journey –but had an interesting story and a satisfying conclusion.   I also liked the second film
(Links of the my reviews to those films are below)

It took me almost a year to get around to finally watching the conclusion……So maybe that in itself  shows that I liked the Rings trilogy better.  I had to see Return of the King the weekend it came out.   I missed Battle of Five Armies in the theaters…….Bought it the week it came out on DVD---but didn’t watch it right away.     The only explanation I can give is that maybe I felt like the story was pretty much already done after 2 films.     This wasn’t a conscious thought really….I didn’t think about it ---there was just no urgency.


So the story of the final film was basically just the surviving Dwarfs have the mountain now and all the Armies go to war for it.    Of course the movie long battle was a visual delight----but the lack of a story - just made it feel like less of a film to me.
I just didn’t feel the same connection to it like I did with Lord of the Rings .    I think the Hobbit would have been better served as 2 movies instead of 3.  A lot could have been cut out of this trilogy and it probably would have been a better film.   I know the Studios turned it into 3 movies for financial reasons---but I feel the final Hobbit films suffered as a result.  The Battle of Five Armies was my least favorite of the 6 films.   (Again I still enjoyed it) --but it wasn't as memorable as the previous films due to a lack of story.

To see my thoughts on the previous films.

Here is An Unexpected Journey
http://bradgeekness.blogspot.com/2013/02/the-last-man-in-middle-eart-to-see.html