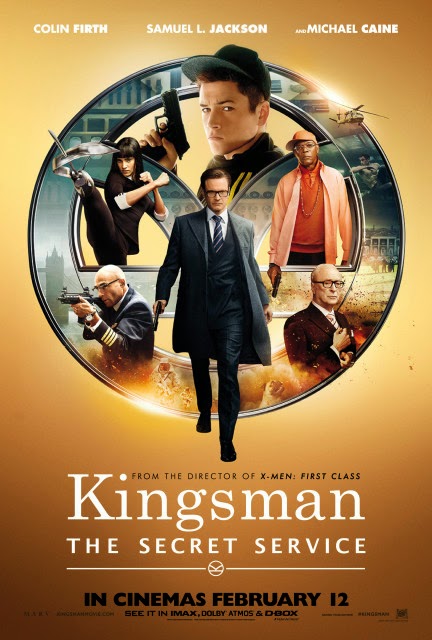 Kingsman The Secret Service has one of the most crazy violent scenes I've ever seen in a movie that takes place in a church.  The violence is in a silly over the top style that reminded me of an Itchy and Scratchy cartoon and therefore didn't seem as violent as it really was.   The film about a super secret spy organization and is based on a comic book called The Secret Service. It definitely had the look and feel of a comic book with its wild action sequences that felt like panels ripped straight out of a comic book.

Colin Firth the Bad ass:
Colin Firth gets to play a bad ass for once and comes off like a total James Bond especially in an action scene early in the film.  This fight scene is a big departure from the classic not so manly fight he had with Hugh Grant in Bridget Jones Diary.  Colin Firth is one of my favorite (non Python) British actors and it was refreshing to see him in this kind of role.

The movie Itself:
I was surprised by the level of over the top violence in the film. The movie reminded me a lot of Shoot Em Up with Clive Owen in it's visual style .   I was expecting a spy movie that felt more like the X-Men First Class movie which its creators were involved in--but instead it felt more like a mix between Snatch and the original 1960's Casino Royale to me.  The story basically follows the recruitment of a young troublemaker to be a replacement for a fallen spy into the secret organization.  I felt the film got bogged down in this training phase a little as the main character competes with other recruits for the only spot in the organization.   I would have rather seen more of actual spy missions and this was probably the main reason I didn't rank the film higher.   The action was fun if you except the over the top cartoonish violence. Samuel L Jackson plays the main villain of the film and  Jack Davenport (Captain Norrington from Pirates) also stars in a brief role as an agent at the start of the film.

I'd say if you liked Shoot Em Up you will probably like this as well.