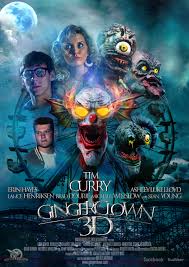 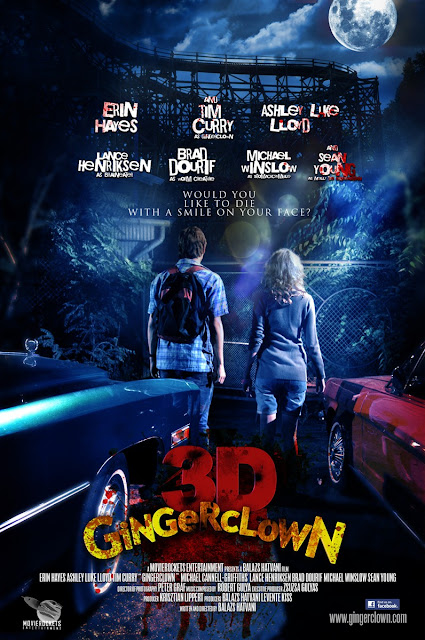 
The title of this strange horror film caused me to stop while I was flipping by on the TV . The description made me record it for later  It was described as teens in an abandoned Theme Park realize it is over run by monsters---(which being a Scooby Doo fan got my attention).   I was expecting a film that was along the lines of  Thrill Ride or the 1980’s horror flick Funhouse, unfortunately I got something else.

The movie starts out with some jock  named Biff (Back to the Future anyone)  that is parked at make out point that decides to bully a nerd from his school that is riding by on a bicycle.
It set a mood that felt like something out of Toxic Avenger ---but after this initial scene the movie goes downhill into bizarroland.    The nerd is challenged to spend 3 hours in an old abandoned Theme Park….his girlfriend that is upset at the Bully decides to accompany the nerd.    The concept for the movie held a lot of potential ---but the strange story and weird darkness of all the shots made for a messy and strange film.   It was listed as a Horror Comedy ---I guess they forgot the comedy part.
The movie featured a bunch of terrible looking Paper Mache looking Monsters.  The budget must have been small for this flick…despite the fact that it featured several knows Hollywood actors like Tim Curry voicing the strange pointless creatures.   The main villain of these strange creatures was a giant Puppet looking Clown called the Ginger Clown. Other creatures included a talking foul mouthed tea pot and a spider creature.     Nothing in this weird film was ever really explained –and it definitely wasn’t scary.
I’d say that Ginger Clown is definitely a forgettable horror movie.
I wish Scooby Doo and the gang would have showed up to uncover what was beneath the absurd looking monsters.