I remember I was around 6 years old when the advertisement for this movie would play on Select TV or was it the Movie channel.  The ad for this film freaked me out.   I would have to change the channel.   It was just a baby carriage turning around slowly with some monstrous arm.


I knew years later after I’d seen hundreds of horror movies that if I went back and watched this movie it was probably going to be super cheesy.  Well this week I finally did and here is the verdict. 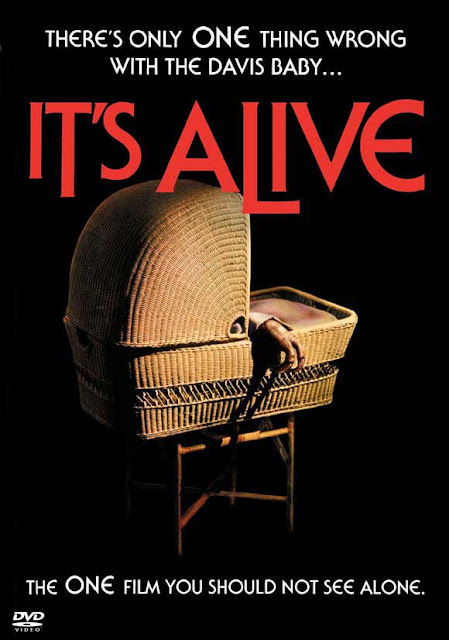 A couple is a having a baby.   Things go terribly wrong.

Apparently this baby was a super mutant killer baby –that the moment it was born decides to kill every doctor in the delivery room and then escape (Best scene in the movie by the way).
The story moves dreadful slow from here on out as the dad and mom deal with the news.   Meanwhile the baby (barely shown on screen—probably for good reason because babies aren’t that menacing in general)  crawls its way all over town killing milk men and joggers as it uses its mutant powers to somehow track where they live.    The baby finally makes it to the house and the dad doesn’t pick up on the clues.   (Like gallons of milk are missing from the fridge).

His young son who they had sent to stay with a relative while they were having the baby—comes home just in time to encounter his creepy mutant brother in the basement….The dad unloads his gun on the quick moving mutant as it escapes.  Then it is trapped in the sewers by the police.  The dad comes face to face with it and decides to keep it alive...but the police have other plans.

I was shocked to learn that this movie actually got two sequels and that it made 7 million in the theaters back in 1977 when it got re-released.  The effects were horrible and the movie was boring.  Too dull and boring to be a cult classic.  Personally I think the only way a killer baby movie works is if you do it for laughs.

Here is the trailer that freaked me out at age 6.

My own Mutant Baby Connection:
I wonder if subconsciously that creepy ad had an influence on me years later when a friend and I wrote a song about a killer baby called Skewer Baby?   Maybe it did---or maybe the evil zombie baby in Dead Alive was a bigger influence.   Anyway the song was based on a horror movie idea we had that featured a killer baby that had survived a plane crash and had a metal rod stuck in him. The concept was to have a parody trailer about a killer baby that moved so slowly that it never killed anyone.  I even have some storyboards for the fake trailer laying around somewhere.  (I'll have to look for them).

Here is a version of the song we performed in the early 1990’s.