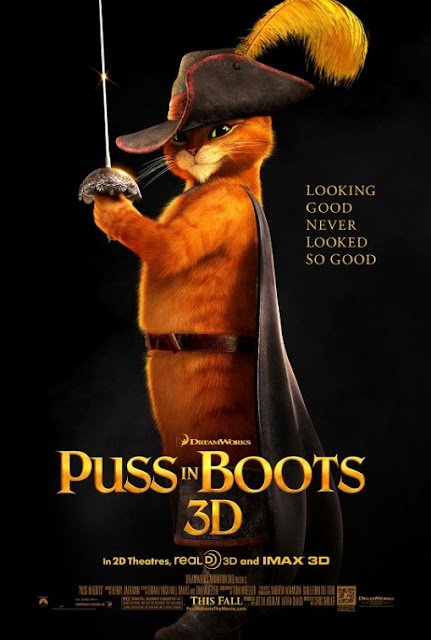 The animation looked good......The movie had some nice action sequences......but it just wasn't good.
A great animated movie has a really good story and characters you care about.....this film didn't have any of that for me.  All visuals and no substance.

To be honest I wasn't exactly dying to see this film in the first place.  I didn't like the character of Puss in Boots in the Shrek films to begin with---so the thought of his getting his own movie wasn't something that interested me.  I'm a dog person and not a cat person. This was a Netflix request by the kids  (and don't get me wrong I love a lot of kids movies---I'm a Disney/Pixar fan---I love Spongebob and Scooby Doo--so I have seen and enjoyed a ton of animated kids films).    Puss in Boots is just not one of those animated movies that I enjoyed.    Not liking the main character gong in never helps.....but then giving him a boring sidekick makes things even worse......I wasn't a big Shrek fan----but at least he had Mushu (I mean Donkey).   Puss I stuck with a bad egg (literally)  Humpty  (boring) Dumpty.   I can see the kids opening their kids meals now and going  "All I got is a rotten egg".    The plot itself was dull....Puss in Boots and Humpty Dumpty pulling a Jack and the Beanstalk and stealing the Golden Goose ---which later attacks the Mexican town that Puss in Boots in supposedly from.   Very disappointing!....It was unoriginal and not a lot a fun.     If you want to watch a Jack and the Beanstalk movie....check out Mickey and the Beanstalk from 1947.

So all in all...Yes kids like it ---but kids also like fart jokes The Smurfs and Alvin and the Chipmunks.
This is one Dreamworks animated movie that I could have done without.