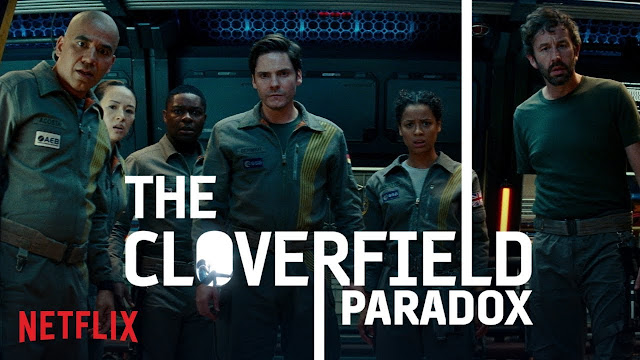 An interesting concept that doesn't live up to it's potential.  Originally a movie called the God Particle this movie was slapped with the Cloverfield title after the fact which is an insult to the audience.   The concept behind the movie is interesting and the movie could have been something along the lines of "Event Horizon"  but instead it becomes a standard trying to fix a broken spacecraft movie instead of exploring the story it sets up.

The story features a group of scientists on a space station testing a device that hopes to solve a dying Earth's energy crisis.  Instead they end up propelling themselves into an alternated reality with Earth no longer on their radar.  They discover a crew member they don't know trapped inside a panel of the spacecraft with wires stuck in her.  Then other unexplainable strange events begin to happen.  The film uses many sci-fi space ship tropes in scenes that mirror other sci-fi films you have seen before.  There is an a scene that is straight out of Alien when a crew member is infected.

The film blows its potential as it turns as the crew tries to get back to their Earth and turns into a  predictable battle with the crew member from the other universe.  And then at the end they throw in a random ending that ties it to the Cloverfield universe.   It really isn't a Cloverfield movie -but that franchise name holds some weight so they decided to try and link it to draw more people into what was just an average Sci-Fi film