I watched the first episode of the new FOX sci-fi show Minority Report the other day and really enjoyed it.    I heard the ratings were not that good and this saddened me---because I believe the show has a lot of potential and fear it getting cancelled too early.
2 Episodes in I decided to revisit the movie as well which is basically a springboard for the show.   Here are my thoughts on both the movie and the show. 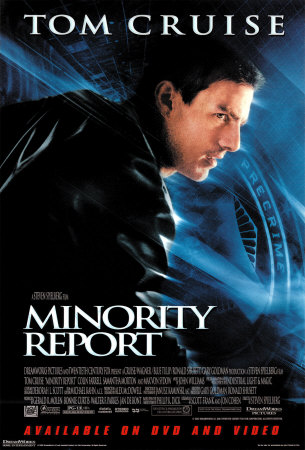 
I loved this movie.  It is probably my favorite movies that Tom Cruise has been in.   A big factor in my loving the movie is that it was directed by my favorite director Steven Spielberg who as far as I'm concerned can do no wrong.  Another factor is that it was based on a Phillip K Dick story.   Some of the best sci-fi movies have been based on Phillip K Dick stories such as Blade Runner and Total Recall…..This movie belongs in that great class of films.

The plot is kind of like the plot for Logan’s Run  --in that the main character is a cop that ends up on the run himself.   In Logan’s Run the main character is a cop that has to hunt down anyone that runs once their lifespan has been scheduled to expire.  In Minority Report the main character played by Tom Cruise is a cop that arrests criminals before they commit crimes based on a program called Pre-Crime.  Pre-Crime relies on three precognitive telepaths that are able to see murders before they happen.   The problem is all of a sudden his name shows up as a murderer and he runs knowing that he doesn’t plan to murder anyone.   The movie follows him as he tries to prove that he is innocent and uncovers some things about the program that throw the whole program into doubt.

The movie has a fun and exciting plot with some solid action sequences.   The look at the future is visually appealing and some of the concepts from this  2001 film feel like they are starting to happen already.   Speilberg is one of the best there is and as usual delivers a good film with  a satisfying ending…. If you like Sci-Fi and Spielberg this film is a must see. 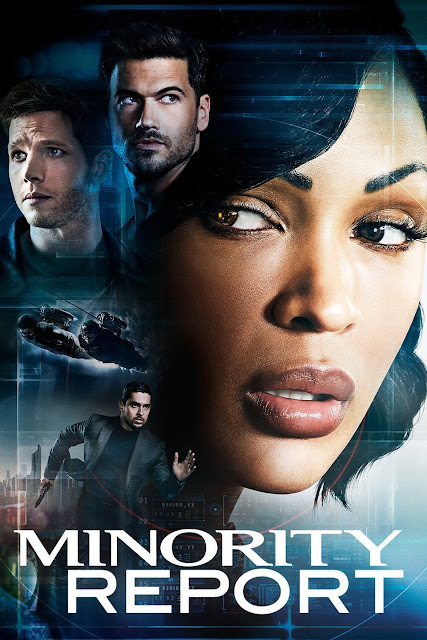 
The TV show is off to a great start with a story that jumps off from the film years later as Pre-Crime has been abolished.   The Precogs  that were sent to live a normal life at the end of the film are now the center of this TV show.   The story follows one of the Precogs (played by Stark Sands)  that has taken upon himself to try and stop the murders.  He secretly teams up with a cop (played by Megan Good)  and together they try to solve crimes together.  Megan Good is excellent as the cop and Stark Sands (interesting name) plays socially awkward well as Dash.  This is a typical fish out of water cop team up story like Castle or Sleepy Hollow with he interesting twist  being the Precogs themselves.   There is an interesting background story involving the 3 Precogs that I hope the show gets around to revealing.   The show feels like a natural extension of the movie incorporating many familiar elements.
This isn’t a reboot –but instead a cool sequel that makes use of the cool elements from the film.  Check the show out while you still can

Here is the trailer for the TV show