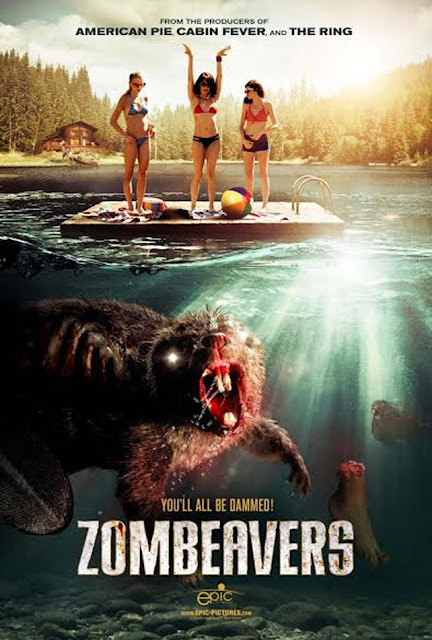 Our Direct TV Box died so we were forced to plug in the Roku and see what was on Netflix.  We watched a Jim Gaffigan comedy special and then my wife fell asleep.   I wasn’t ready for bed  so when I saw that Zombeavers was finally out on Netflix  I decided it was Bad Movie time.

Three Sorority girls head up to a cabin by the lake for guys free weekend.  The place is so remote that their cell phones don't even work  (Dam).  Of Course the boys show up anyway and so do some Beavers that have been contaminated with some toxic chemicals that have turned them into Zombeavers.   Yes you heard that correctly Bloodthirsty Zombie Beavers!

The poster for this movie is great and the trailer makes it looks like a blast.  So Bad it is good right?   Not so fast.   Zombeavers is exactly as bad as it sounds.

The girls sunbath while the ominous beavers lurk beneath the surface of the water.  By ominous I mean some bad remote controlled beavers and hand puppets.  At night the girls try to relax in the cabin and hear a scary noise outside.  It just turns out to be the boys coming up to party.  Then just when the film is about to get good and the cute blond goes to take a shower she is attacked by an angry beaver  (Dam).  The next day for some unknown reason the group decides to go swimming in the lake. -because that is what you do after being attacked by a beaver).   Hey let's swim in the same lake that the crazy beaver must have come from.   The gang is attacked of course and tries to take refuge on a raft in the middle of the lake.  One of the guys decides to sacrifice the tiny dog that tries to outswim the remote controlled beavers with no success.   The gang makes it back to the cabin  (one missing his foot) where they try and hide out from the deranged beavers.   The hand puppet beavers attack the cabin.  A couple of people decide to make a run for it in the car that won’t start at first only to have the road blocked by a downed tree (Brilliant Zombie Beavers).    Then the movie decides that the ugly hand puppet beavers aren’t scary enough so there is a scene where the hot blonde that was attacked the night before goes to seduce the hot nerdy girl –only to turn into an angry mutant beaver girl (tail and all)  just when things are about to get good again.  (Dam)

Apparently this virus doesn’t just turn people into zombies---but Zombeavers as well (with big beaver teeth).   The rest of this bad film includes a whack a beaver scene as the beaver hand puppets break their way through the cabin floor.   The nerdy girl decides the bathroom is safe and that it is a good time to get it on with one of the guys and just when it is about to get good the blond beaver girl breaks through the wall and bites off his male body part  (Dam).     So we are left with the hot nerdy girl in brad and panties and the other girl taking off in a truck trying to escape.

Oh well I knew what I was getting into.  How good could a movie called Zombeavers really be.

Watch the trailer  Skip the movie ---unless you are desperate for some bad angry beaver action.