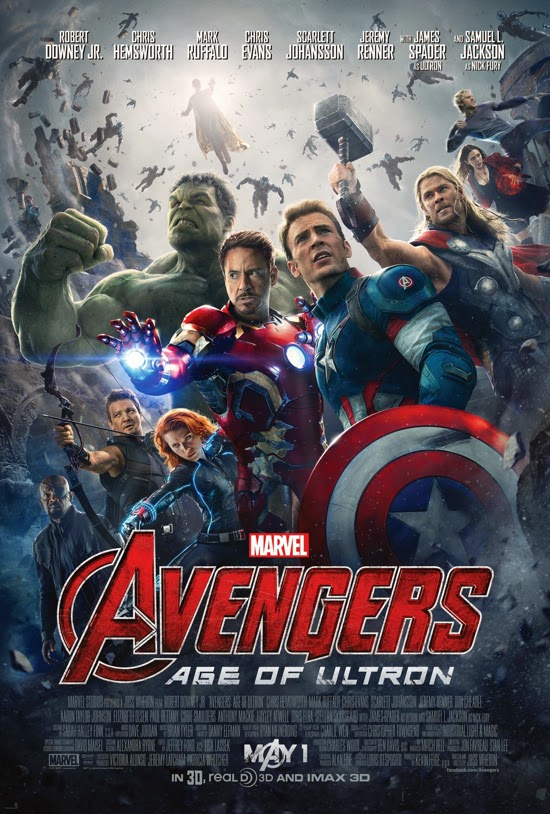 
Does anyone remember back in 1980 when Superman had to fight the three villains lead by General Zod at the end of the film.
It seemed so epic at the time.   I mean Superman was facing 3 powered individuals at the same time and a bus was overturned.   What more could we ask for???


Avengers: Age of Ultron is what we could ask for.  The opening sequence was a little too CGI and felt like one of the scenes in the jungle from Kingdom of the Crystal Skull, that everyone hated .  In Avengers it worked perfectly.  I know that this film isn't going to feel or look realistic and quite frankly it doesn't need to.   It is comic book adaptation about a bunch of super powered heroes saving the world.  It doesn't need to feel real like Indiana Jones in Raiders of the Lost Ark -because there is a guy flying around holding a magical hammer.

Avengers: Age of Ultron was like watching that cool ending of Superman 2 in 1980 for 2 solid hours. Joss Whedon was again able to balance a large group of super heroes and give them all something to do in a thrilling story.

The Story
The story itself was solid with the Avengers having to save the world from something that they unwittingly unleashed themselves (okay so it is basically Bruce Banner and Iron Man's fault).  Ultron is  an Artificial intelligence that did what all artificial intelligences do in movies, goes crazy and decides humanity needs to be wiped out. The Avengers must pull together before they pull each other apart in order to save the day.

The Action
The action was completely over the top and amazing all at once.  It was a non-stop roller coaster ride.  The action sequences popped off the screen like frames of a comic book. It was a ludicrous display of epic unbelievable action that could only be in a comic book movie.

The cast once again was excellent including all the cameos from characters from the Avengers solo movies.  I credit this to Joss Whedon's excellent writing and his time on shows like Buufy and Firefly.  One of my favorite scenes in the movie wasn't even one of the amazing action sequences-  but instead the scene at the party --where everyone took turns trying to lift Thor's Hammer.  This scene was a perfect mix of humor and the interactions between the cast in this scene was excellent.  The look on Thor's face when Captain America was able to almost move it was priceless and at the end of that light moment of humor the villain surfaces to completely change the mood.  Whedon is able to get his cast to work so well together --a skill he honed on all of his hit TV shows.  It is the character's interactions and dialogue with each other that makes this movie a 10 out of 10

The Agents of Shield Factor

Being a Joss Whedon fan I've been following along with the TV show Agents of Shield.  The show has had an excellent Season 2 after a kind of slow start to Season 1.  The show has been clicking on all cylinders lately and the episode last week lead directly into this movie in the same way that the aftermath of Captain America: Winter Solider effected it last year.   Watching this show and its direct lead into Avengers made both the movie and the show better.  This week the show picked up right where the movie left off and had a thrilling episode that leads into a 2 hour finale next week.  It is all connected and the connections that Marvel has been making have turned me into a huge fan of the MCU.