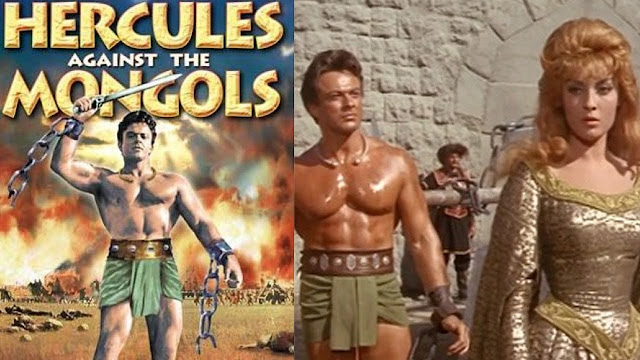 
This Italian film features Hercules (played by Mark Forest) battling against the sons of Genghis Khan that have over run a city and taken the princess captive.  The film features some decent action sequences --but the plot feels at times like a poorly constructed Kung Fu movie. Hercules displays his legendary strength at several points in the film --like in his first battle with the Mongols where he wields a giant tree to swat away his enemies.  But when he battles in hand to hand combat he seems to struggle against his foes.  These inconsistencies in his strength pretty much sum up the fell of the entire film which at times is good and at other times feels sloppy in its storytelling.

Email ThisBlogThis!Share to TwitterShare to FacebookShare to Pinterest
Labels: 1960's movie, Hercules, Hercules against The Mongols