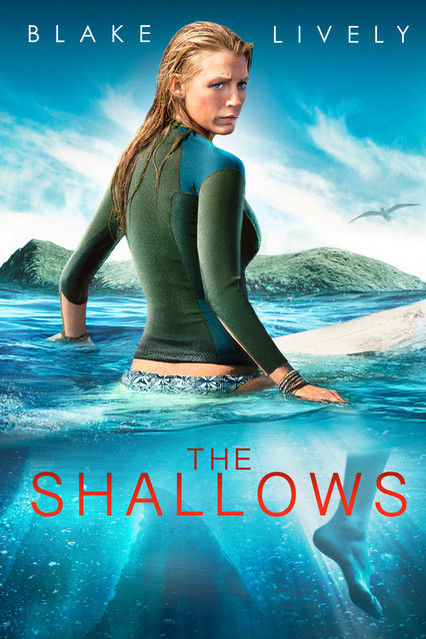 The movie is actually less of a Shark Movie and more a movie about survival along the lines 127 Hours.  You know the movie about the mountain climber that becomes trapped under a boulder while rock climbing by himself.   I guess I probably wouldn't like that movie either because it is hard to feel sorry for stupid and careless characters.

The main character in this movie (played by Blake Lively) decides to go on a surf adventure in a foreign country all by herself after the death of her mother.  This is about the stupidest most reckless thing someone could do.  All surfers and swimmers know that you should always go in the water with a partner.  So my sympathy for the character was already super low by the time she is attacked by a shark.   This premise may be interesting to some --but it can be boring if you aren't invested in the character.   A major portion of the movie is basically the character stranded on a rock yelling for help as a shark with nothing better to do hanging around.

I don't blame the actress.  I feel Blake Lively did a decent job with the role she was given.  The plot was just so stupid that by the time you get to what should be an exciting end you are just ready for the film to end.  I was over it by the time she decided to try and swim from the rock as high tide approached

There were so many times during the film where my wife turned to me and said "This film is so stupid".   A great example is after sleeping on the rock all night she wakes up and see a drunk laying on the beach.   The drunk is a Hispanic character that looks like s stereotype straight out of an old time western.  He is staggering after a night of too much Tequila.  She flags him down in an effort to get her phone and call for help.  Instead he predictably steals all of her stuff while waving at her.  Of course he then tries to swim out to steal her surfboard as well only to get eaten by the shark.    Other dumb moments include the "for shock value only moment"  when she tried to eat a live crab while on the rock.  I get she is hungry---but it isn't like she has been stranded there for days to where she would need to eat a tiny live crab whole.  And then there is the wounded seagull that she tries to help.  We get it she is a doctor and needs to survive to help people---but she isn't going to try and heal a bird when she is fighting for her own life.

I was really hoping to like this movie...but it was too dumb and too boring that many of the bad low budget Shark Movies are actually more entertaining.

For my Guide to Shark Movies good and bad go here.http://bradgeekness.blogspot.com/2012/11/guide-to-shark-movies-good-and-bad.html