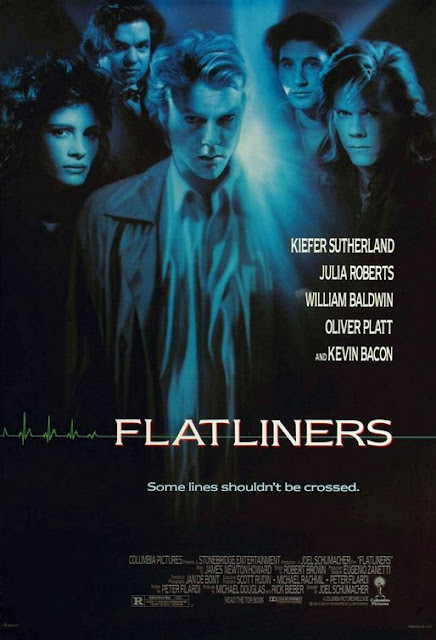 I never got around to seeing Flatliners when it came out back in 1990,  which is a little weird because I pretty much watched everything.    Back in the day I wasn't much of a Kiefer Sutherland or Julia Roberts fan.  I grew an appreciation for him after Dark City and the tv series 24 (Still not a fan of Julia).   I noticed it was playing on Chiller TV the other day and figured I'd finally get around to checking it out.

Flatliners has a quality cast that consists of Kiefer Sutherland,  Julia Roberts, William Baldwin, Oliver Platt and Kevin Bacon.  They play a bunch of medical students that decide to experiment around with death to see into the other side.   The movie has a cool cast and an interesting concept.  They take turns stopping their hearts and then bringing each other back from the edge,  the results aren't what they planned for.

As I mentioned above I loved the concept - but the execution feel flat (sorry bad pun)   The concept could have been taken in so many interesting and cool directions.  Instead it ended up being a little dull.  The characters end up being haunted by sins or traumatic moments from their past and struggle to resolve those issues.  I was really hoping for something more interesting out of a concept that opened so many doors.   It was cool to finally see the movie with it's 1990 retro mullets and catch these actors when they were young again, but I had just hoped for more out of the story.

I hear that a remake is in the works.   Hopefully they can take it in a more interesting direction.