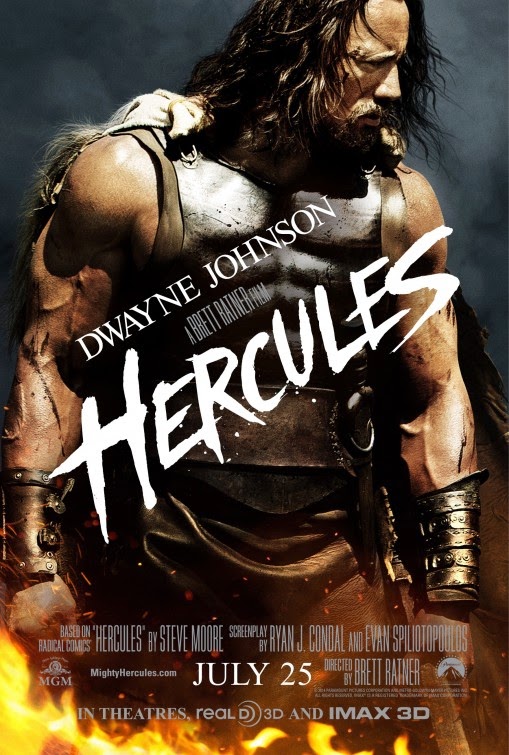 I was looking forward to Hercules.   Dwayne the Rock Johnson is one of the few legitimate action stars today and his casting as Hercules was a role he was meant to play, unfortunately this was not the Hercules we were looking for.  They basically took the Mythology out of Hercules and tried to play it straight without the mythical elements that make Hercules so legendary.  I felt the advertising for this film was misleading in regarding that and the film suffered from misleading me into thinking I was getting a different film.  They took would could have been an epic story and instead made a much smaller, less inspired and more predictable movie.   It was really a waste of the Rock's talents as well as Rufus Sewell (Dark City) and Ian Mcshane (Deadwood).    Hercules and his crew of misfits from "many previous adventures" get hired to protect a city from terrible invaders in exchange for gold.  They even have a dull "Let's train the farmers how to fight segment".

Hercules teaching the citizens of El Poco (Three Amigos) to sew like the wind is not really the type of epic adventure we would expect from Hercules.  I was hoping for a modern day Jason and the Argonauts with major special effects.  Instead they gave us a story where Hercules legends are just that "Legends".    The story has a predictable twist  (SPOILER)

It turns out that Hercules was played for a fool and was fighting for the wrong side all along.  He then decides to make things right.   One of his crew pulls a Han Solo and is happy to take his reward and leave and basically even gives the same speech about it being a suicide mission that Han gives Luke in Star Wars.  The rest of Hercules band wanders straight into a trap and should have been killed except for the infamous James Bond villian moment where they tell them their plan and then set them up for a slow death.   If this was Game of Thrones Hercules head would already be on a pike outside the city.   Of course Hercules buddy that pulled a Han shows up at just the right moment and rips of another line from Star Wars---and Hercules finally has to show some of his legendary strength to save the day.

The only redeeming thing about the movie was that some of the action sequences were decent --despite lackluster plot.

My Advice ----It is worth a rental if you are looking for a little action--just don't get your hopes up for an epic film.